To Become A Foster Parent or Adopt A Child 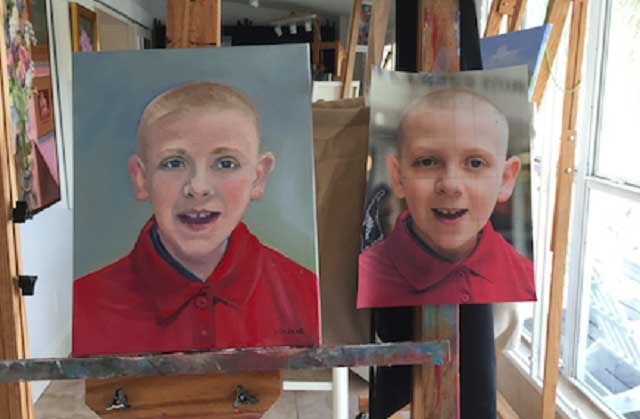 It’s not every day that we see a painting of ourselves hanging in an art gallery. For a child who has lived in foster care for most of his life, he is not likely to have many photographs of himself either.

Witnessing the reaction of a child when seeing his portrait on display at Art Avenue, a large gallery in the Westfield Siesta Key Mall, tells how we take for granted the keepsakes of dog eared photos and class pictures that most parents save and savor. His photo is among 30 paintings and 15 photographs of children in foster care waiting to find forever homes, most of the children over 14 years of age.

The portraits are part of The Heart Gallery of Sarasota — the primary source for recruitment of adoptive parents for the Safe Children Coalition, the agency licensed to handle foster care and adoptions in our area. The Heart Gallery’s website and traveling photo exhibit of children waiting adoption has affected hundreds of adoptions since founded in 2005.

For Stiles, a boy who had been featured on the Heart Gallery intermittently over eight years, hearing that his portrait was on display at an art gallery in the mall was cause for excitement for himself and his adoptive new family, Kim and Brian Walden and their biological son, who is the same age as Stiles. Stiles is a vibrant, attractive young man who has personality and charisma to spare and his photos do justice to his captivating presence.

When Stiles photo was first taken, he was just nine years old and since that time, he had been placed in 12 foster homes and one group home in Hillsboro county for four years that has been closed by the state. He chose to have his photos taken again when he was 16, hoping he would attract an adoptive family. The Walden family began the two-year process of adoption, finalized just 10 days before Stiles 18th birthday. These photos are the only remembrance to their son’s childhood.

The Heart Gallery was initiated for that very reason — to give children a voice to advocate for themselves, and at the same time give potential adoptive parents a way to get to know them, creating a bond from the very beginning. Not every teen wants to put themselves out there in a this very public way.  They are still children who want to fit in, but those featured want to change their lives.

“It’s an ongoing effort among all child service agencies to address misperceptions about harder-to-adopt children, especially teens. Before the Heart Gallery was implemented, teens, sibling groups and children who were medically fragile in foster care had only a one percent chance of being adopted. But now, thanks to the program, these children have a 60 percent chance of being adopted” according to Allison Juceam, Executive Director of the Heart Gallery of Sarasota.

The exhibit of the faces of foster care can be seen at Art Avenue throughout the summer.

The Heart Gallery of Sarasota is working to change children’s lives by giving a voice to our community’s forgotten children through photographs taken by local photographers.